The Inquest has officially started today and is scheduled to run for three weeks, from the 5th until the 23rd of August, at the Coroners Court of Victoria. The court typically convenes from 10am until 4pm, with a break from 1pm until 2.30pm.

The court will not convene this Wednesday or Thursday (the 7th and 8th of August).

The Coroners Court of Victoria is located at Level 11, 222 Exhibition Street, Melbourne, Victoria. 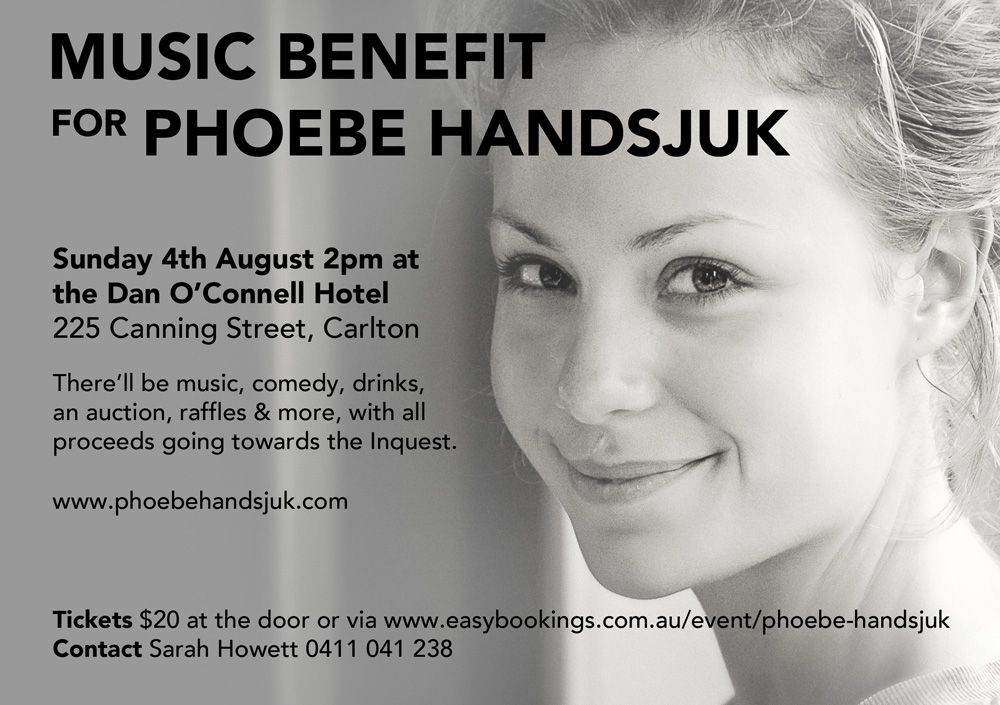 A benefit will be held on Sunday the 4th of August at the Dan O’Connell Hotel in Carlton from 2pm. There will be live music, comedy, an auction, raffles and more. It will be a great afternoon and we’d love to see you there.

Tickets are $20 and can be purchased at the door or online at http://www.easybookings.com.au/event/Phoebe-Handsjuk

All proceeds will go towards the legal costs for inquest.

A fundraiser will be held on Saturday the 20th of July at 4PM at the Mallacoota Golf and Country Club. There will be live music, delicious food and an auction. All proceeds will go towards the legal costs for the coronial inquest to be held from the 5th of August 2013.

With its serene lake, rugged beaches and natural beauty, Mallacoota was a very special place for Phoebe. It is her resting place and will forever be the setting of many fond memories.

We have set up a campaign to help us raise the money to cover the cost of having legal representation at the inquest. A donation as small as $5.00 will help.

You can find more details on the Support the Inquest page.

We are enormously grateful for all the love and support we have received from everyone since we lost Phoebe in December 2010. Sadly, there are still many questions surrounding her death. We hope the inquest will allow us to find the answers.

A Directions hearing was held in the Coroners Court on the 1st of May 2013. A witness list was established and a date was confirmed for the Inquest. It will begin on the 5th of August 2013 and is predicted to run for three weeks. Twenty seven witnesses will be called.

I met Phoebe when I was 14 years-of-age. I still remember the first time I met her at a local cafe in Kew with a group of friends. The memory is still so vivid, like no other. The ora and beauty Phoebe had would light up a room. Sometimes I think this worked against her; she was so beautiful, and you could tell she didn’t want to be in the spotlight – she saw the greater things in life.

Still in the younger years, we met regularly on Bridge Road for a cups of coffee or I’d go back to her house and sit in the cubby house or watch The Simpsons in the front room. We chatted about anything under the sun. I must also say, I was a huge fan of her Mother’s cooking and could never let one of those dinners go a stray! I remember on her 17th or 16th birthday (I cant remember the year), she had guests over to the house. Towards the end of the night we were lying out on the veranda with two stubby cans of VB and just looked at the stars. There was so much peach surrounding us. We lost contact again and rekindled in later years – nothing had ever changed.

The warmth that surrounded Phoebe brought peace to many, she had a light in her that burned brightly – you never felt judged, you could always open your heart and speak whatever was on your mind. Phoebe was an old soul who had knowledge beyond her years. A true leader that inspired so many along the way, and wow, what a fighter. I used to confine in her with all my deepest worries and concerns and her advice was the only I advice that I’d ever take. You just knew she was always right. She gave me and others so much confidence and brought happiness to the lives of many.

We stayed in contact throughout the years (mostly by me begging friends that knew her or met her for her new number!) – I think it was around 2008 when one of my close friends worked at a pub in Lorne and contacted me that one day to tell me that he met the most amazing girl he’d ever seen. He hardly gave a description, and I immediately asked if her name was Phoebe, and it certainly was – the alluring and mysterious Ms. Phoebe could never be mistaken!

Although she was loved by so many, she could never be yours to keep, you could only have Phoebe for a moment and then she’d be gone, without a trace. With anyone else you would lose trust, but you knew with Phoebe that no matter what she was doing, she still thought of you the same way.

My last conversation with Phoebe was in September before she passed away; we were planning to meet up and I still remember my last words to her; “Your messages always make me smile, you have always had such a kind heart, and your mumma too if she remembers me.” In someway I am glad that she knew just a little bit as to how much she meant to me, but I do believe in some way she did know just how much.

When I heard about Phoebe’s passing, I could never let any answers go unanswered. Nothing made sense, I knew from my instincts in recent months before her death her depression was bad, but Phoebe was NEVER the type to give up. No matter how many pieces of information was found around her death – I just knew something wasn’t right from the bottom of my gut. For justice and for peace, I was so relieved that the inquest went through. My thoughts and prayers are with the Handsjuk’s every day.

Phoebe, you will never be forgotten. I think about you everyday, and you continue to inspire me in any situation, I try my hardest to think what you’d do. You taught me so much, and I thank you. I wish you were here.